What a difference a day makes.

The Times-Picayune Clock Tower, which still looms above the newspaper’s now-deserted former headquarters, was a star on last night’s episode of “NCIS: New Orleans.”

Today, parts of the newspaper’s presses were pulled from the building in pieces. The newspaper’s parent company began printing the Picayune on the presses of its sister paper, the Mobile Press-Register, 145 miles away, in January. 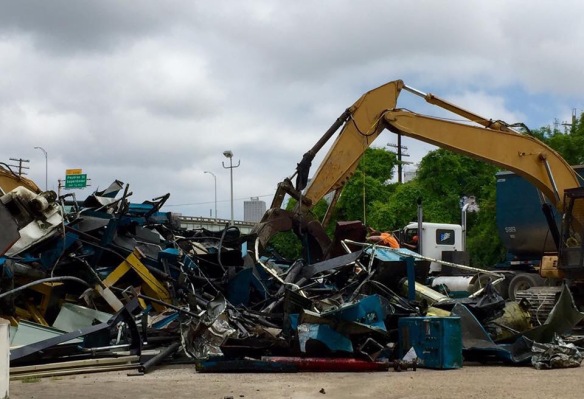 In the spring of 2012, the New York-based Newhouse family, owner of The Times-Picayune, announced their plans to make New Orleans the largest U.S. city without a daily newspaper. Prominent New Orleanians stepped forward, first pleading with the Newhouses to keep the newspaper a daily publication, and then imploring them to sell it to local owners who would. Tom Benson, owner of the NFL New Orleans Saints and NBA New Orleans Pelicans teams was one who offered to buy the newspaper.

Fast-forward three-and-a-half years. In a nearly 1,400-word Page 1 column published Dec. 27, NOLA.com/The Times-Picayune New Orleans Saints reporter Jeff Duncan beseeched Benson to sell both the Saints and the Pelicans, ideally to local owners. “Your teams’ faithful fans deserve better,” Duncan wrote. “And the reality of the situation is this: The best way to ensure the long-term success of the franchises is to sell them.”

Benson wasted no time in responding. In a 667-word response released that evening, he flatly rejected the suggestion that he sell either team, and reiterated his intention to transfer ownership to his wife, Gayle, upon his death.

Benson then took aim at the hypocrisy of The Times-Picayune essentially demanding that a revered New Orleans institution sell in the interest of ensuring stable, local ownership:

imploring me to sell for the benefit of the city. I recall in May 2012, reaching out to the Newhouse family imploring them to sell to me or other local ownership as they threatened to become and then became a part-time newspaper. Since then the newspaper has done nothing but lay off staff and move operations out of town.” – New Orleans Saints and New Orleans Pelicans’ owner Tom Benson

Whether the situation is ironic or hypocritical, it’s certainly amusing. For those who’ve followed the entire saga, read the statements below and guess if they’re from:

Underscoring that Advance’s New Orleans property isn’t the only one that loves to invoke marketing-speak when talking about its business, Siegel reports, “Our local sales and marketing teams have leveraged their entrepreneurial abilities and expansive digital knowledge to prove they can grow digital ad revenue faster than we’re losing print ad revenue. In 2015, our local leadership teams plan to generate higher total ad revenue in every one of our markets, reversing a longstanding trend of decline.”

Advance Local’s lofty prognostications aside, Edmonds reports that based on the aggregate results of publicly traded newspaper companies through the first three quarters of 2014 (many company’s fourth quarter’s results won’t be reported until next month), the yearlong results are expected “to show total revenue at most companies and the entire industry down again.”

“Other newspaper/digital companies may also be able to achieve revenue growth in 2015, though to my knowledge, Advance is first to make that promise.” Poynter Institute’s Rick Edmonds

Advance is a privately held company and consequently is not required to report the same level of detailed financial and operational data that publicly traded companies must disclose.

Edmonds notes that while Siegel’s letter highlights digital advertising, it doesn’t mention circulation revenue, which while a falling line item at almost all newspapers, is still a significant contributor for many. Add to that the fact that Advance’s newspaper websites are free, meaning they don’t reap digital subscription revenues the way a number of prominent newspapers now do.

And by publishing and/or home-delivering print newspapers fewer days in most of its markets, Advance has foregone print or bundled subscription price increases that “most of the rest of the industry” has enjoyed, Edmonds noted, adding that the industry overall saw successive 5% circulation revenue gains in 2012 and 2013, the most-recent available figures.

He does note that Advance has been right on two predictions: Newspaper “digital ad revenues could grow from a small base, and that print declines were irreversible. And in theory, it now has leaner operations well-positioned for growth into the future.”

Despite the thousands of jobs across the country that Advance has eliminated as part of “Digital First,” Siegel hinted that operations aren’t yet lean enough. “… this journey will take a little longer and be a little harder than we originally anticipated, which is why we continue to need to recalibrate our expenses,” he wrote.

The Columbia Journalism Review keeps the heat on Advance Publications, with another hard-hitting look at another Advance newspapers to undergo “digital first.” From the opening of the story:

“As a major reorganization of the Guild-represented Cleveland Plain Dealer takes shape, veteran reporters are adjusting to ‘backpack journalism,’ the division of staff into two companies, a looming move to a new office, and demands to post stories more quickly. At the same time, they are memorializing their old newsroom in striking images that are circulating on social media and in email chains. The accompanying photo was sent to CJR by a former Plain Dealer employee with the subject line, “This used to be a newsroom.”

The devastating photo, however, no longer accompanies the article. According to reader comments to the story, P-D Photo Editor Jon Fobes said it’s his shot and that he demanded that CJR remove it from the story, which the magazine did. You can, however, still see it on this page of the Newspaper Guild, Communications Workers of America website. That is until the photo is deleted once Fobes also complains to the union. After all, Advance probably hates unions even more than it hates CJR these days. And Fobes needs to hang on to his job.